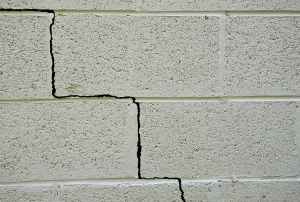 Bowing, buckling, tipping, or leaning foundation walls is an issue that should never be ignored or put off because of the potential resulting danger.

Tilting basement walls almost always are a result of outside pressure being put on the structure. Leaning is difficult to notice at first and happens before cracks occur in the concrete or brick.

Because bowing walls may collapse if not fixed, it is recommended that you seek the help of a qualified foundation repair specialist.

Our foremen and contractors are licensed, insured, and experienced in assessing foundation, basement and crawl space issues and executing long-lasting prepares that address what is causing wall bowing and cracking.

We provide free estimates for homes and commercial properties throughout the Detroit, MI region. Call us today to schedule a foundation repair quote.

When a basement wall is bowing or leaning, it means that the structure has been weakened. Repairs are necessary to strengthen the wall so that it is safe and to prevent future problems.

The sooner foundation problems are addressed, the cost to repair the issue will be less and the potential for more cracking and bowing will be eliminated.

Because there are many different problems that can lead to foundation bowing, we offer proven solutions that specifically address the issue. We thoroughly asses the foundation and use the latest technologies to deliver trusted long-term remedies.

In some cases, bowing and buckling foundation walls may need to be straightened by excavating the surrounding soil. It is rare that a wall will have to be totally replaced.

We offer the following repair options:

With our free quotes, we lay out costs and solutions. There is no obligation and you don’t pay unless we do work.

Foundation walls are under constant pressure from surrounding soils. The only resistance against this pressure is the walls themselves.

Thus, it’s not surprising when foundations fail and weaken. The following are common causes of structural cracking and bowing.

When gutters are left unattended, water overflows and saturates the soil below. Similarly, improper grading, when land slopes toward the foundation, can bring moisture to the soil.

With the presence of water, soils expand and become heavier, putting more pressure on the foundation.

Soils can deteriorate and become weakened by freezing and thawing. Poor soil can cause foundation settlement and heaving.

Growing roots from mature trees nearby can push against the foundation, causing cracking and tipping.

Signs your foundation is bowing or buckling

Sometimes the presence of a bowing wall is obvious. You can clearly see the wall pushing out at the bottom or sliding in near the top. Diagonal, horizontal, or stair-step cracks might have appeared.

In other cases, the amount of tipping might be so small that it isn’t noticeable. However, other symptoms might indicate a leaning foundation in need of professional repair. They are: